Adventures in 3D Printing Part 2: How I Designed a Printer Farm Unit

I had been searching for a 3d printer that would be a good candidate for a 10-unit printer farm, that was large enough for the particular parts I wanted to print, cost-effective, sturdy, and easy to assemble - unfortunately, I did not find one. In Part 1 of this series, I narrowed my search down to the Folger FT-5 and tested it.

It turned out the Folger FT-5 wasn’t going to make a good printer farm unit candidate, even in modified form. While the FT-5 provided a large print envelope as well as excellent prints after adding an E3d lite 6 hot-end and heated basalt tile bed, it was a major pain to assemble. Assembling 10 or more of these units was not going to happen within a reasonable time frame. (And in fairness, I’m pretty sure that was not the designer’s intent; it was a kit for tinkerers and the budget-conscious, not production line shops.)

So, I decided to design my own printer. 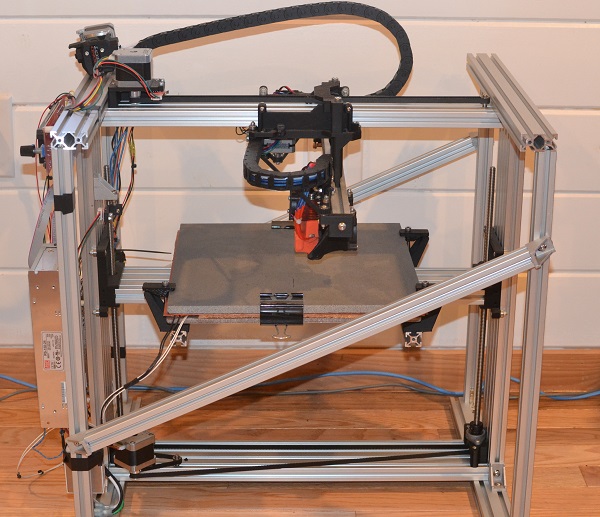 I came up with some fairly basic design goals. First it had to be easy to assemble - see above! It also had to be easy to expand in either the X or Y axis. This is due to some custom products potentially being much longer than the 40cm in length, possibly up to 1m. And finally, it had to be simple. KISS has more recently become a major design philosophy of mine, after years of trying to engineer to the absolute perfect solution.

I was also obsessively focused on reducing moving mass on the X and Y axis, so that the print head could travel very fast to aid in printing the large product quickly. This is actually a fallacy for large volume parts printed with a large nozzle, something I’ll go into detail about in another post. For now, it was off to the races for lightweight moving parts!

The simplest design to start with featured a square box made from 8020 aluminum extrusion, supported at the ends with 2020 legs so it wouldn’t tip over. There was a large gantry riding on the top 8020 beam for X motion, and a cantilevered 2020 extrusion supported underneath the gantry for the Y movement. Having the gantry ride only on one rail would make extending the travel a snap, as just a new top and bottom piece to the 8020 square would need to be swapped in.

The major downside of this design was that the Bowden tube needs to ride underneath the top rail of the gantry it is moving along, because the rail is in the center and the nozzle passes underneath it as it travels along the Y axis 2020 section. This forces the Y axis rail to be offset a substantial distance from the gantry so the Bowden tube can make a 90 degree turn exiting the hot end to travel along a cable tray to out of harm’s way. 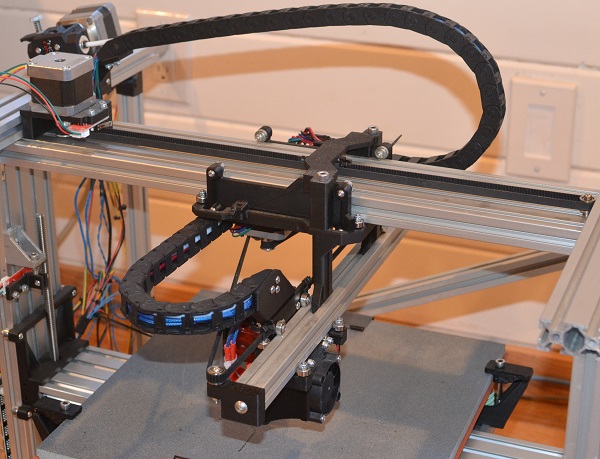 Fortunately I’m quite stubborn, and was determined to find a way to make it work.

Another pillar of the design was to use the extrusions as rails. Since there is only one wide top rail, two linear slides at the edge of the rail running parallel would have been the only solution, which is an over constrained problem I wanted to avoid. There was the option of using V-wheels, but they are big and clunky, and wouldn’t work with my lightweight 2020 Y axis rail.

And so I started using 10mm OD bearings to ride along the rails everywhere (623ZZ), selectively adding bearings to control degrees of freedom. To get a section supported, for example the side 20mm of the top 8020 rail, I printed a side carriage member with four bearings contacting the rail. While most extrusions were almost spot on 20mm (such that from Misumi), some of the Folger Tech sourced extrusions vary slightly on adjacent sides. This and the nature of printed parts required many slight design iterations to get a snug but smooth rolling fit. (Fun fact - Misumi 8020 isn’t 80mm on the long side, it is actually only 79.60mm!) 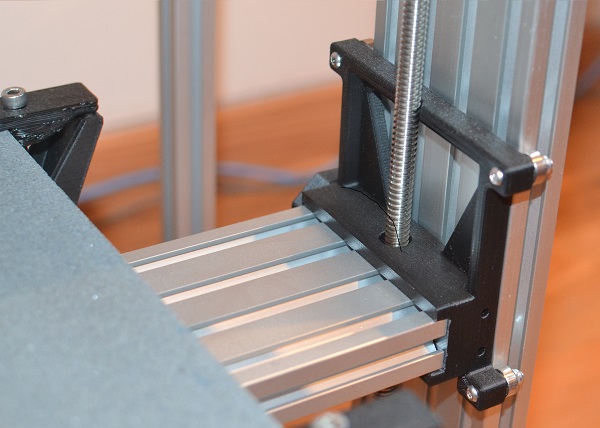 Fast forward many hours of adjustments and tweaks, and the finished product was a smooth running, stiff printer, that printed as well as my workhorse modified Folger.

But would it be easy to assemble a bunch of them, or would I still have to tweak and print multiple carriage parts to get a good fit?

That gave me an idea, what if I had a fixed design universal slide that I could then make brackets to connect to. Read about this next phase in Part 3